Can Neurofeedback help with Tourette’s syndrome?

Case studies suggest that Neurofeedback can be helpful with Tourette’s syndrome (TS).

One study from 2011 showed that, after a total of 22 sessions of Neurofeedback, a 17 year old male with TS showed a reduction of tics and affective symptoms, and improvement of cognitive performance after training.

Here is a description of young boy who felt much better after Neurofeedback training. The tics have been reduced to less than 50% of what they were before, and are now mainly seen when he is under stress. The family climate is now much like in any other family with teenagers, and his mother describes a relaxed atmosphere at home.

In another case study a 16 year old boy undertook extensive training which resulted in his tics and involuntary outbursts associated with his Tourette’s beginning to subside.

In Yale University in USA they are currently recruiting people with tics to their new project. Their hypothesis is that the Neurofeedback training will reduce tic symptoms more than the sham feedback. It seems that the scientists see great potential in Neurofeedback as a method to treat TS.

What is Tourette’s syndrome?

It is a neurological condition which is combined with involuntary noises and movements called tics.

It usually starts in childhood and continues into adulthood. In many cases Tourette’s syndrome can be associated with Obsessive Compulsive Disorder (OCD) or ADHD. 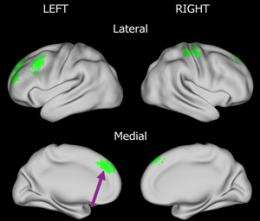 Scientists at Washington University School of Medicine have identified significant differences in brain regions (displayed in green) between adolescents with and without Tourette Syndrome. Read more at: http://phys.org/news/2011-01-children-tourette-syndrome.html#jCp

Tics can be worse during periods of:

Neurofeedback training is a self-regulation strategy. The brain is trained at the point where the tics are to reduce or eliminate them. In a brain with TS there is over-arousal. There is a high degree of excitability of the motor system. The overarching need is for this brain to experience calming, both in general and specifically in regard to motor circuits. When such calming is achieved tics (motor and vocal) may be reduced.

At BrainTrainUT we will create the best Neurofeedback training for your presentation of  Tourette’s syndrome. With the right approach, Neurofeedback practitioners have seen significant improvement in symptoms in the vast majority of cases. Nonetheless every case is different and sometimes you may not experience the reduction of tics but overall you should feel more relaxed and you should notice a better quality of sleep.  This is a condition that appears to benefit from long-term training.

To find out more about Neurofeedback to help with Tourette’s syndrome, please call us today at (801) 686-9334. Your initial consultation is free and you are under no pressure or obligation to proceed.